The Meat industry faces severe physical, regulatory and reputational risks stemming from water scarcity and water pollution. Effluent from processing facilities and poor manure management from confined animal feeding operations both discharge harmful pollutants into waterways, while runoff from fertilizer used to grow animal feed is a major driver of harmful algal blooms. The industry’s reliance on corn and soy for livestock feed leaves it vulnerable to commodity price volatility risk, which has been exacerbated as climate change has increased the frequency of extreme weather events.

Despite its outsized exposure to water risks, the Meat industry is doing the least to manage them, on average. While the industry’s average score has improved slightly since 2017, it remains the lowest-performing of the four industries benchmarked. 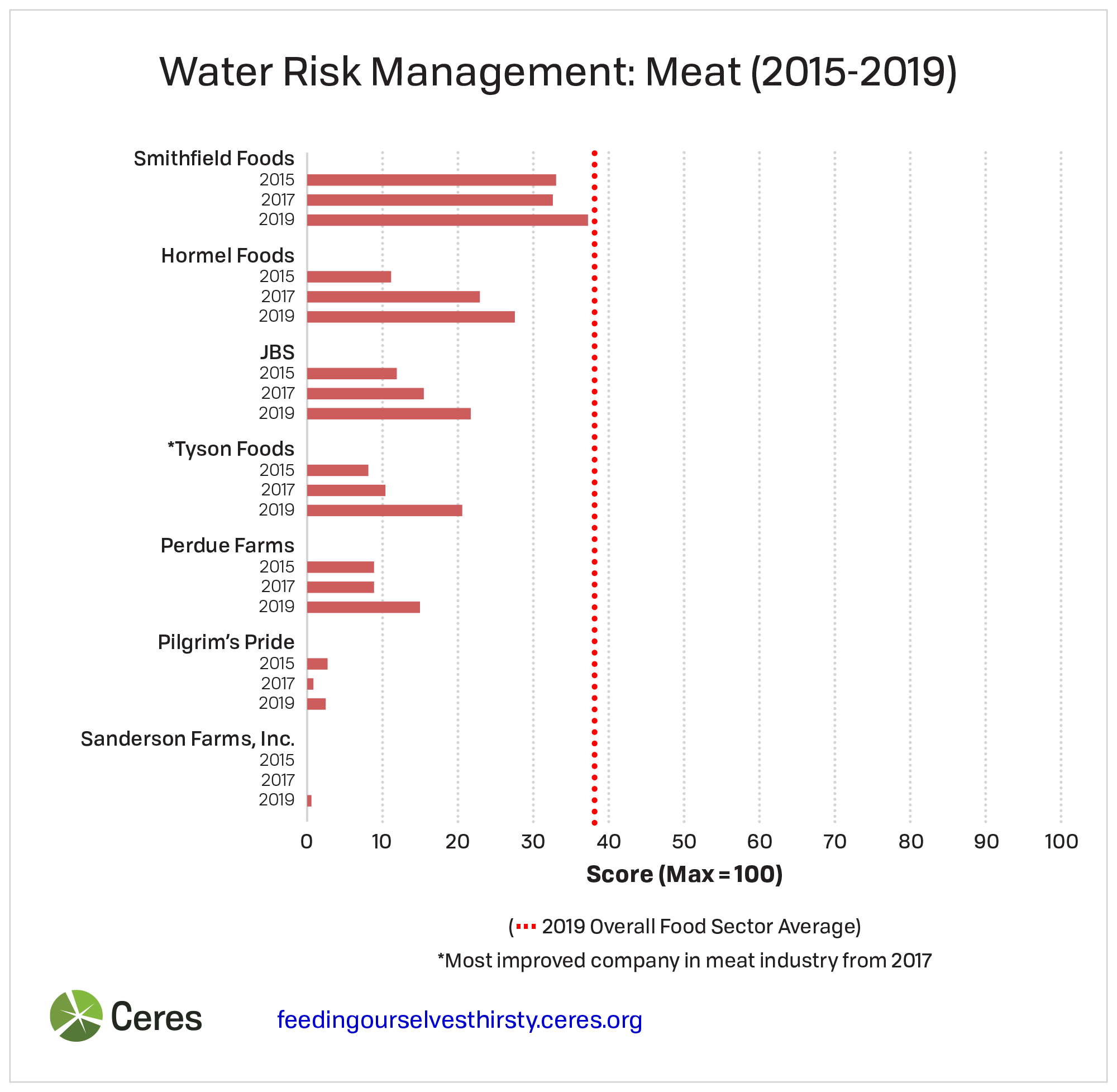 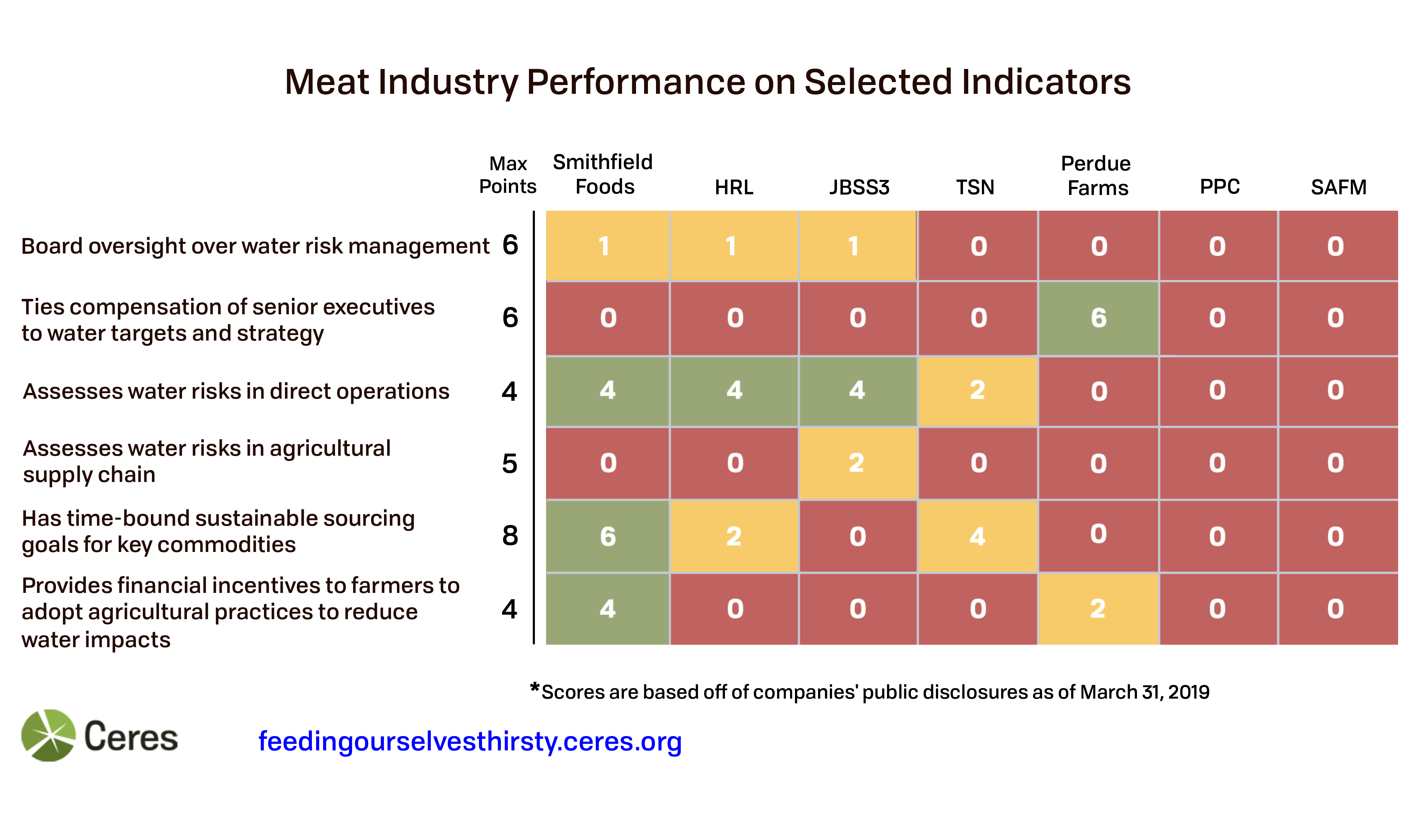 Only a selection of indicators are represented. See the scoring guidance here.

Four of the seven Meat companies (Hormel, JBS, Smithfield and Tyson) reported basic water accounting data (including water use and wastewater discharge) for their owned operations.

Given the water intensity of industrial livestock production, Meat companies are profoundly exposed to risks driven by climate change and water scarcity. In addition, as the primary driver of several of the country’s most intractable water pollution challenges, the industry must act with greater urgency to reduce its impacts on water quality across its facilities, contract operations and feed sourcing.

Beef, poultry and pork slaughtering and processing facilities in the U.S. routinely violate federal wastewater discharge permits and other water pollution regulations. While the Meat industry struggles to achieve regulatory compliance, there are many examples of other food companies setting wastewater discharge standards for their facilities that are more stringent than required by law.

Confined animal feeding operations (or CAFOs) – whether directly owned by Meat companies or by their suppliers – face pollution risks through issues such as seepage of manure into groundwater, and/or runoff of overapplied manure onto nearby fields and/or the overflow of manure lagoons during heavy rain or flood events. The impacts of meat production on water quality are likely to be exacerbated as flooding becomes more frequent and severe due to climate change.

Meat companies can enhance the resilience of their supply chains while catalyzing improved environmental performance by making sustainable-feed sourcing commitments with an explicit focus on water quality. Yet, only two out of the seven Meat companies benchmarked have done so to date.

Smithfield Foods achieved its goal to ensure that 75% of grain purchased by the company (farmed on roughly 450,000 acres) was grown with efficient fertilizer and soil health practices. The company is still progressing towards a greenhouse gas (GHG) reduction goal that includes soil health within its feed supply chain.

Tyson Foods has committed to improving fertilizer practices on two million acres of corn by the end of 2020, which represents enough land to grow feed for all of the company’s annual broiler chicken production. Tyson has initiated two pilot programs on 500,000 acres of corn and is leveraging cloud-based agricultural technologies to help farmers improve sustainable agriculture practices.

In May 2017, Tyson announced a collaboration with the World Resources Institute to develop context-based water targets for its facilities and its supply chain. The company disclosed that these targets would address water scarcity and water pollution and be informed by local watershed risks. However, two and a half years since announcing its intention to set these targets, Tyson has yet to make them public.